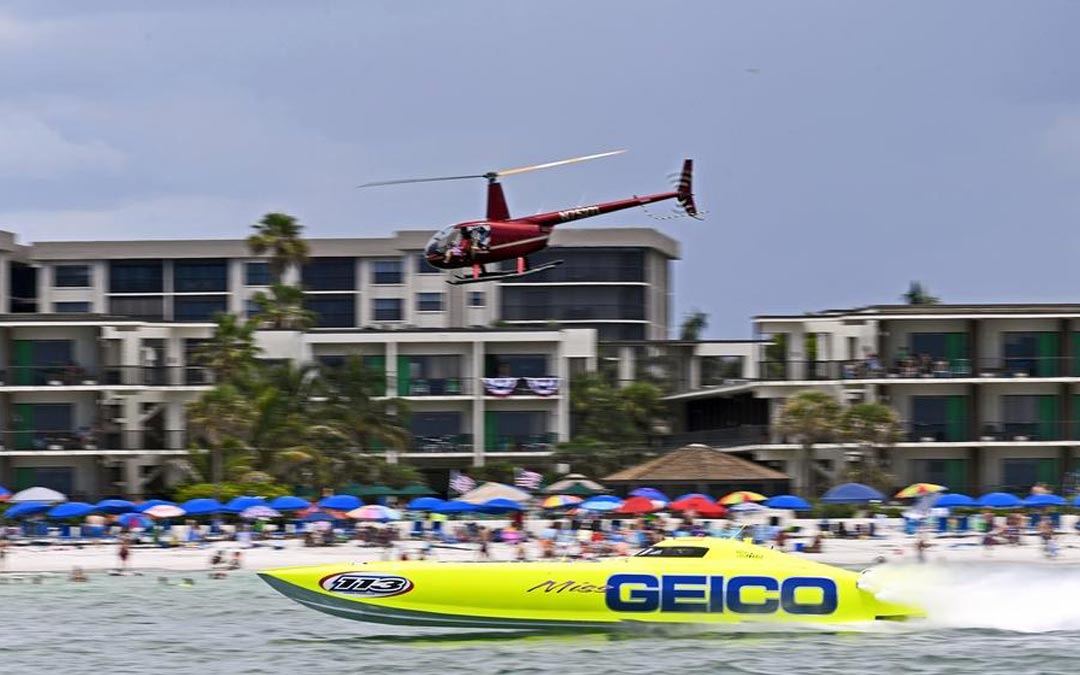 A look at the cost of offshore racing in Sarasota

Ever wonder what it costs to field one of the Unlimited boats that you’ll see rocketing through the waters off Lido Key in this weekend’s HotelPlanner.com Sarasota Powerboat Grand Prix Festival?

Scott Colton, the team manager for Miss GEICO Racing, has that answer. And it’s well into the seven-figure range.

“If you were just to purchase the boat, the engines, drives, props and everything else you need to put it on the water — and not just race it — you’re probably talking over $1.5 million,” Colton said.

Colton said that cost figure doesn’t include spare engines, spare parts and support vehicles such as trucks, trailers and support boats that accompany the team on race weekends — one of which is a custom made trailer that pulls Miss GEICO.

Miss GEICO features a pair of Mercury 525 cubic inch, twin turbo engines with 1,650 horsepower each. The engines, which cost around $175,000 each stock, have all been updated and upgraded for racing use. That gives Miss GEICO a top speed of approximately 185 mph, depending on which set of propellers are used.

“When we show up at a race we typically have two engines in the boat and two spares in the truck,” Colton said. “The turbos mean they’re not as loud as the other engines, but that provides us with more boost that gives us more power and more acceleration.”

Colton said a set of propellers runs about $36,000. The team tests on the Saturday before the race to determine which propeller will work best in any given conditions.

“You have to have a set of propellers for every type of racing condition,” Colton said. “If it’s a short race, you’ll go with a smaller propeller because you’re going to want more acceleration. Non-ocean races go with a little higher pitch propeller for more speed. On speed runs, we use the biggest propeller we can because it produces the largest amount of power possible.”

“We carry about six sets of props, so the conditions will determine which props you go with.”

“Sarasota has a tendency to lull people into thinking it’s not rough because you’re racing in the gulf, but it has always been bumpy,” Colton said. “It’s sort of a deceptive course because you’re not seeing big rolling waves coming onto the beach. When you add all of the boats and the flotilla of boats it gets a little rough.”

Miss GEICO driver James Sheppard and throttleman Steve Curtis are nestled in a reinforced cockpit near the center of the boat. The windows were made smaller in an effort to strengthen the cockpit area in the event of an accident. Colton said the upgrades cost “tens of thousands of dollars.”

“We’ve reinforced everything with carbon fiber and we’ve created a way for the water to dissipate on the right side of the boat or the left side of the boat depending on how we strike the water,” Colton said. “That keeps the water pressure away from the drivers inside the cockpit.”

The cockpit also features a complete fire suppression system that would extinguish a blaze onboard if the need arises. Drivers are situated in shock-absorbing seats with five-point harnesses and wear HANS devices between their helmets and shoulders to keep their necks stable.

“When they’re going at full speed, they’re going at about a football field per second,” Colton said. “The difference between NASCAR racing and us is that they’re used to a similar track. Every time a race boat goes around the track it has less fuel and that makes the boat get a little more flighty. The guys have to make all kinds of changes throughout the race as the boat gets lighter and conditions change.”

Miss GEICO’s main hull was manufactured by Victory Production Company in Dubai, United Arab Emirates, in 2003. The team imported the boat several years ago and a lot of money goes into making the boat one of the fastest in the world each year.

“We’re always working on the bottom of the boat to modify it and make sure that we’ve got the center of gravity perfect,” Colton said. “When these boats were created, they weren’t meant to have this much horsepower. We’ve had to make a bunch of upgrades to accommodate all the horsepower.”