CURTIS TAKES RELUCTANT 4TH AT ROAR ON THE SHORE 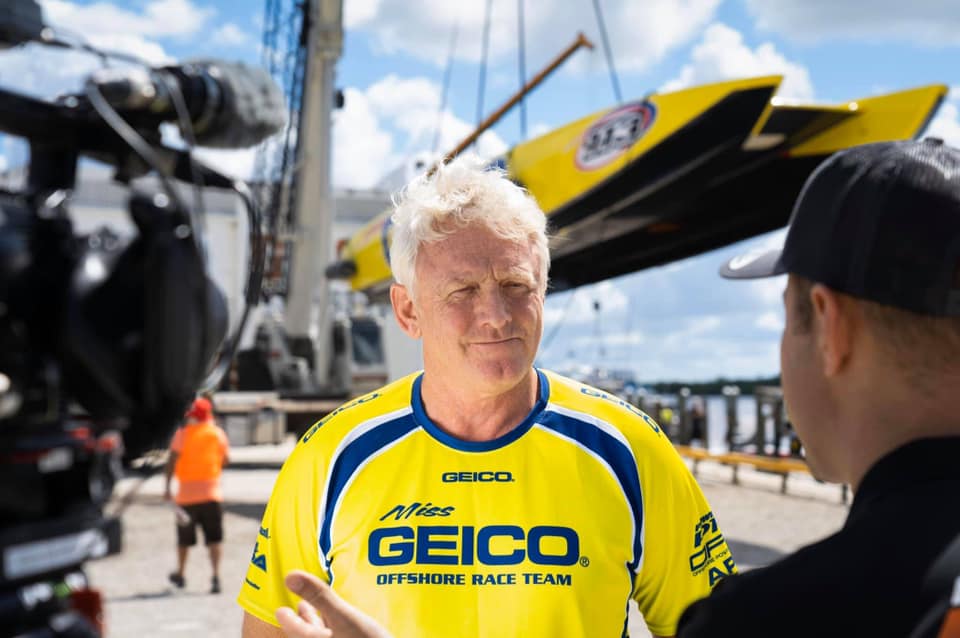 After a lengthy summer break, Steve was ready to get back in the boat for the final round of the APBA Offshore Championship at the Fort Myers “Roar On The Shore” race last weekend. Although MISS GEICO haven’t had the best of luck this season they are always eager to please despite the teams disappointment in having to face multiple challenges outside of their control since losing their original race boat in Sarasota earlier this Summer.

This weekends race at Fort Myers saw an amazing turn out in support of offshore powerboats racing. The online coverage on the live streams have for sure gained much improvement, which is something Steve is keen to support to raise the profile of the sport. With at least one thousand more viewers eyeing the race from around the world it proves this sport is on the up and that the world is finally taking notice again.

Steve, joined by Miles Jennings made sure the fans got to see the much loved team fight it out, although without the power they needed to secure a placement MISS GEICOS prized throttleman is accustomed to. “We had a poor start and got hosed down in the first turn, so we were down on power for several laps. By the time the engines dried out, we really didn’t have much for them”, said Gary Stray on the teams 4th place on Saturdays event. The team had hoped for rougher seas than were being forecasted, a style of racing Steve is infamous for gaining his victories in, although with no control over the weather all MISS GEICO can ever do is prepare for it and hope everything works in their favour.

“I’ve raced in Fort Myers multiple times, beginning in 1983. One of the things I remember most about this venue is the historically rough conditions, which I prefer, but didn’t get on the day. It was a pleasure to be back in Fort Myers it is a great location and the turnout was fantastic as always. Although we didn’t place where we’d like that’s just racing! There’s always next season. We ran the boat as hard as we could to attain the best possible result, but it just wasn’t our game, there were many factors holding us back which we will not be dealing with next year – so we know how to get back in the game. Unfortunately more time was needed and in mid season you just don’t have time to start from scratch. A huge congratulations to the Victory team for their racing this season, including the second Victory boat, which is great for the class, and for the sport as a whole .”

The final race of the season will be held on November 22 at Englewood Beach for the APBA World Championships.